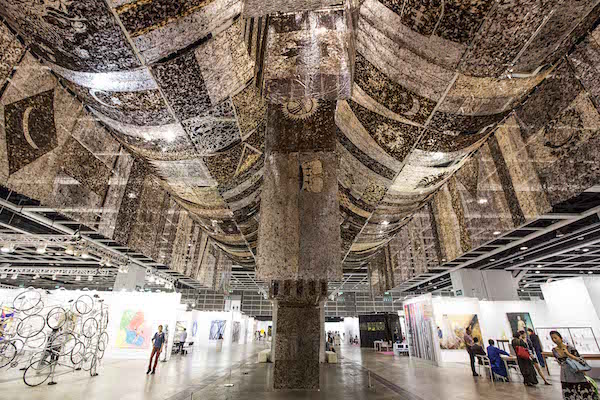 When a major European art fair sets up an offshoot in Asia, there is a tendency to compare and contrast the two regions. Art Basel originated in its namesake Swiss town in 1970, and now incorporates fairs in Miami Beach and Hong Kong. It’s a massive shift from the picturesque Swiss town of Basel to the concrete jungle of Hong Kong, and the fair takes on a different identity accordingly.

The third Art Basel Hong Kong (simply referred to as ‘Hong Kong’ in the Art Basel offices, where the Basel fair is ‘Art’ and the Miami fair referred to as ‘Basel’) will feature exhibits from over 200 galleries in the massive two-storey Hong Kong Convention and Exhibition Center. In wide aisles separating the sea of stands, large-scale installations curated by Alexie Glass-Kantor will include work by the likes of LA artist Sterling Ruby (Gagosian Gallery), Indonesian artist Eko Nugroho (Arndt) and Australia’s Mikala Dwyer (Roslyn Oxley9 Gallery). To ensure a striking presence in the midst of crowds and booths, many of these works are astoundingly large, including five-metre high banners by British artist Hew Locke, three-metre wide inflated taxidermy creatures by Yang Maoyuan from China and a 70-metre-long canoe by Singaporean Zai Kuning.

Ahead of what is set to be a hectic five days from the first Private View on March 13 to the final day of public viewing, Rebecca Gallo caught up with recently appointed Director Asia of Art Basel, Adeline Ooi, to discuss art in Asia, the next generation of collectors, and why international art fairs seem to be more important than ever. 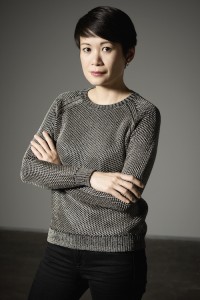 There has been a lot of conversation and commentary in the last decade about the art market in Asia, and China in particular, shooting ahead to become one of the most powerful in the world. Do you agree with this perception, and what do you think drives it?

I like to see Asia as a new world. Art Basel Hong Kong is only three years old, compared to 45 years of Basel, but in Asia time accelerates. It’s the classic development story, from no electricity to suddenly everyone owns a cell phone, and as with anything, I think the art world is a reflection of what’s going on in society in general. It is seen as the area with the highest growth, but to be completely honest, there is a lot that needs to be done. We have always described Asia to my European colleagues as this creature that has popped up on steroids, but their vertebrae haven’t fully formed.

In China for example, what does this sharp growth that has accelerated ahead of infrastructure mean for galleries and museums?

The major commercial galleries in China are very powerful, with the means to bring wide exposure to their artists. I think in terms of institutional structure in China, that is an area that is still growing. Another thing to remember about China is the broad definition of art. How does the tradition of calligraphy, for example, of ink painting, stand in relation to contemporary art? What we’ve noticed through the fairs is that we are seeing a younger set of collectors coming through, we’re talking 45 and under with high paying jobs. They are the ones with real buying power in China. It’s a very interesting demographic.

Do you find that these collectors generally focus on artists of their own generation?

I think you get the classic case of buying something from your own country first, and often I think we gravitate towards expressions of our own generation, because it just speaks to you. Some go within a six-month period from buying local Chinese artists to having lunch in LA with a gallery owner and looking at young LA artists. And this is not only in China. We’re finding collectors within the same age group with similar buying patterns across South East Asia, India and the Middle East.

I think galleries have a responsibility to show up at their local fair – it’s your home turf, and you’ve got to represent. And then I think there is a responsibility for galleries in terms of their artists’ needs. In this day and age galleries need to be able to bring artists to different audiences and expose them to different sets of collectors. Art Basel Hong Kong is a very international platform. Crowds from China, Europe and America might not come all the way down to Singapore or Sydney, but you know you’ll find them in Hong Kong. We’re finding that it’s becoming more and more important for institutions to show up as well – museum directors, curators and art critics.

It’s never just about the buying that happens on the floor, it’s also about building relationships. I think it’s about the possibility, the seeds that grow in that crazy intense five days. What’s interesting too is that we’re finding more and more exchanges between galleries because of that regular return and reunion. Based on what we read and what you see it can be a very cold, competitive sector, but at the same time there are all these really wonderful friendships that form, and a sense of loyalty and support that galleries offer each other.

Do you have any predictions about what you think will be popular at the fair this year, any particular styles or artists that people are talking about?

It’s really too early to tell, but I think there are some interesting vibes about abstraction. We have to wait and see what happens when the crates open. Dianne Tanzer has a very interesting artist she’s showing [Yhonnie Scarce], I think that will be a very strong solo presentation. What’s interesting is when you speak to people on the floor. I remember in Miami someone said, “Aha! It looks like this year’s all about black and white!”. And then someone else says, “there’s a lot of colour this year!” And it’s true, I guess when you have 200 galleries you can always identify common strains, but it really depends on who’s looking.