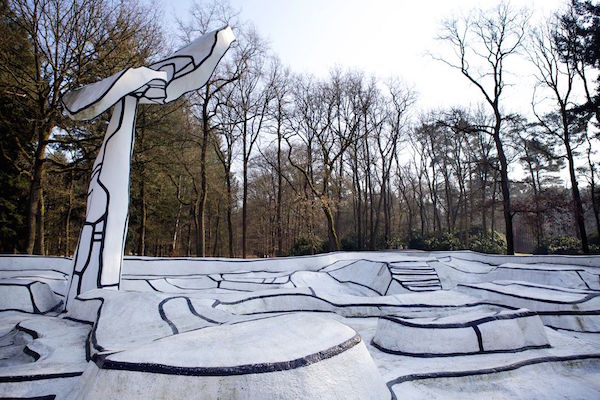 Many travel far and wide to experience the major art museums of the world, but here we take a look at a different kind of art pilgrimage. Sculpture parks and outdoor museums have long been a part of our cultural landscape, and Rachael Vance takes us through some of the highlights around the globe.

Outdoor sculpture parks have origins tracing back to the landscaping of traditional Chinese rock gardens during the Han Dynasty period (206 BC-220 AD) and Japanese gardens developed during the Heian Period (784-1185). The rock was elevated to the status of an art object and great care was taken in its placement. This symbiotic relationship between nature and art reached great heights in the history of Western outdoor sculpture during the Renaissance, when classical figurative statuary displaying mythological imagery adorned outdoor “museums”. The legacy of that era endures in examples such as the Palace of Versailles in France, the Boboli Gardens in Italy and Austria’s Schönbrunn Palace, where formalist garden design is a royal art.

Such traditions of open-air sculpture have continued to evolve throughout the course of history, often with breathtaking results. Today, sculpture parks often work collaboratively with artists, landscape designers and architects in order to maximise integration with the chosen site. Site-specificity, longevity, engineering and experimentation with materials allow for new possibilities for outdoor sculpture. From environmental art and land art, to light, sound and kinetic sculpture, artistic interventions within nature have developed into an important and relevant form of public art.

The Kröller-Müller Museum and Sculpture Garden in Otterlo, The Netherlands, is located within the 13,000-acre Hoge Veluwe National Park, accessible by bicycles provided onsite. The sculpture garden follows founder Helene Kröller-Müller’s vision of a symbiosis between art, architecture and nature. Sculptures are displayed over 75 acres of forested hills and valleys, including works by Auguste Rodin, Henry Moore and Richard Serra. In acknowledgment of modernist architecture the journey of discovery continues with the inclusion of two architectural pavilions designed by Aldo van Eyck and by Gerrit Rietveld.

Established in 1977, the Yorkshire Sculpture Park (YSP) in Wakefield, England is positioned on the 18th-century Bretton Estate grounds. With at least 60 sculptures on display at any given time across the historic parkland, YSP additionally has five indoor galleries that include a restored 18th-century chapel. The park is internationally renowned as a centre for modern and contemporary sculpture and features artists such as Martin Creed, Dennis Oppenheim, Marc Quinn and James Turrell. Founder Peter Murray’s progressive artistic vision helped to earn the park UK Museum of the Year in 2014.

The Wanås Foundation in Knislinge, in Sweden’s south, is a non-profit foundation that was established in 1987. The park presents over 40 site-specific sculptures and conceptual artworks surrounding a sprawling overgrown 15th-century rural medieval castle grounds. Amongst barns, stables, an organic farm, dairy and cafe, works by international artists such as Marina Abramović, Dan Graham, Ann Hamilton and Yoko Ono enhance the fairytale-like environment.

Cradled in the Tuscan hills between olive groves and vineyards, the Chianti Sculpture Park near Siena, Italy, is set on 17 acres. Owner Piero Giadrossi’s vision for the park is to present the work of lesser-known artists to an international European audience. Showcasing a variety of artists from 25 different countries, artworks are realised in a diverse range of materials from glass and steel to bronze and granite.

The Skulpturlandskap Nordland, located throughout the county of Nordland (a northern region in Norway), is for intrepid art lovers. A bounty of striking contemporary sculpture is installed on rocks, cliffs, beaches and fields along northern Norway’s remote Atlantic coast. Artists hail from 18 different countries and include the likes of Anish Kapoor, Antony Gormley and Cristina Iglesias alongside Norwegian artists such as Per Barclay and Inghild Karlsen. Aiming to enhance the surrounding environment, each commissioned piece is the result of the artist’s personal connection to the specific location of their work.

Highlights: Antony Gormley’s “Havmannen” (1955), a figurative granite sculpture installed 15 meters from the coastline and Tony Cragg’s “Untitled” (1993), consisting of seven stones with circular perforations situated on a pier in Bodø.

The Hakone Open-Air Museum, established in 1969, was the first museum in Japan dedicated to outdoor sculpture. Located in the picturesque foothills of Mount Fuji – a region celebrated for its hot springs – the open-air museum includes 200 sculptures by internationally renowned sculptors such as Carl Milles, Henry Moore, Alicia Penalba and Churyo Sato. In keeping with local traditions, the sculpture park incorporates a hot spring footbath and the display rotates according to the seasons.

Alan Gibbs’ private outdoor sculpture museum Gibbs Farm, located in Kaipara Harbour on New Zealand’s North Island, is home to a series of site-specific contemporary sculptural interventions. Open to the public by appointment, visitors can see works by 90 different international sculptors. Responding to the scale and undulation of the landscape that slopes towards the coastline, many of the monumental pieces are visible from aerial satellite images. Artists in the collection include Richard Serra, Daniel Buren, Len Lye and Tony Oursler.

Named after its proximity to the neighbouring Storm King Mountain, the Storm King Art Center is located 100 kilometres north of New York City. Founded in 1960 by philanthropist Ralph E. Ogden, the 500-acre park is one of America’s largest sculpture parks. Artists on display throughout the fields and woodlands include David Smith, Magdalena Abakanowicz, Andy Goldsworthy and Isamu Noguchi. From 16 May 2015, American sculptor Lynda Benglis will exhibit a range of fountain sculptures and a glow-in-the-dark work to be featured in Storm King’s moonlit night walks.

Bernardo Paz’s complex Instituto Inhotim in Brumadinho, Brazil is situated on an enormous 5,000 acres. As the largest open air contemporary art institution in Brazil, Inhotim uniquely incorporates an emphasis on biodiversity, exemplified in its breathtaking botanical gardens. Throughout the 22 pavilions and expansive grounds visitors can expect works by artists such as Matthew Barney, Yayoi Kusama and Dominique Gonzalez-Foerster.