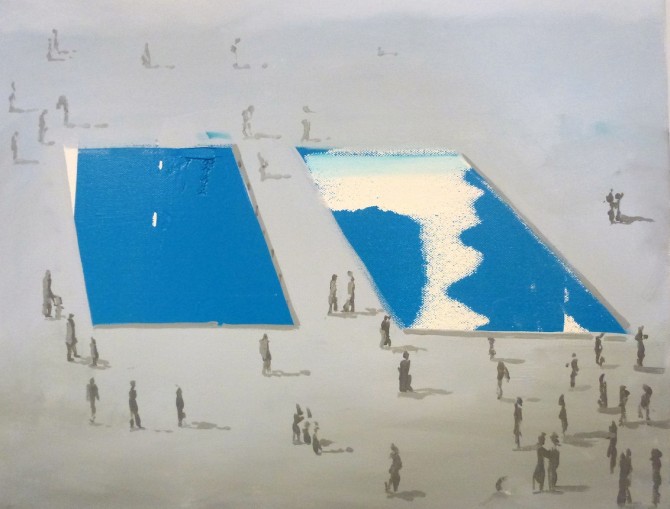 Stephen Farthing, No Towers (Sth Manhattan) No.3, 2001, acrylic on canvas. Image courtesy of the artist.

The act of witnessing is by no means passive. We all decode information via a different set of parameters and we are all makers of our own meaning. In the context of a voracious contemporary media cycle – led by the proliferation and democratisation of the digital image – we are all complicit in what we see and hear and what we make of it.

It’s from this somewhat thorny ambit that group exhibition Witness – curated by Melbourne-based artist and academic Kit Wise – takes its bearings. Known for his own video negotiations of natural disasters and a kind of creepy, contemporary picturesque, Wise has selected a handful of local and international artists whose work trawls disaster, trauma or loss from various perspectives and via various mediums. In this Linden-wide show, some are more successful than others.

Wise has positioned Venezuelan artist Eduardo Kairuz and Jeremy Wafer in the first gallery space. Both artists deal with architecture in varying ways. Kairuz shows meticulously deconstructed photographs of decrepit Venezuelan apartment blocks, effectively using a physical process – that of painstakingly cutting the printed image with a scalpel – to unpack the oppressive psychology of state architecture. Wafer also deals with architecture, his wall drawing of a featureless, cellblock-like structure plays with the eye and mind – its sense of perspective and depth set unsettlingly askew.

In a small adjoining space, Stephen Farthing’s pair of compact oil paintings distil one of modern history’s most traumatic and baroque calamities – the 9/11 World Trade Centre attacks – into a moment of quiet absence. The works see figures forlornly wandering around the site’s memorial pools, the drama and violence just a breath away. Across the hall, Kathy Temin abandons her iconic soft sculptures, leaving just the plinths on which they usually stand. Each supports a pair of headphones playing personal testimonies of events witnessed during the Holocaust. Tom Nicholson and Brook Andrew’s works also deal with history, in the context of colonial contact with Indigenous Australia.

Lucy Bleach and Wise’s own work both deal with natural disaster. Bleach’s lush video work, text and sculpture consider the experience of living in the vicinity of an active volcano in an almost poetic cadence, as we shift our gaze between a 16mm film of a bubbling, smoking volcano and the mythic, historical text on the adjoining window and wall.

Wise’s audio-visual work is the most gripping and affecting of the bunch. In a simple, yet deft gesture, he abstracts images of the Japanese tsunami of 2011 to create blurred, opaque flickers of colour and light, leaving us with nothing but a haunting audio track of panicked hollers, cries and thundering water. By deleting the disingenuous iconicity of these much-seen images, he grants us a new perspective on the underlying effect.